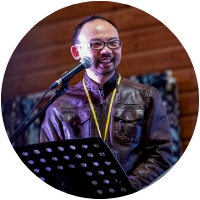 Pastor Prakich Treetasayuth received a Bachelor’s Degree of Science, majoring in Biochemistry, from Chulalongkorn University, Thailand. He was awarded a Master’s Degree of Philosophy in Theology from the Norwegian School of Theology. After receiving Christ in Hope of Bangkok Church in 1988, he was committed to the church and involved in its ministry in many areas including biblical studies. In 1995, He became a regional pastor and the Head of Publication, in charge of the church’s teaching resources. He was appointed as the Pastor of Student Ministry in 1999. Ps Prakich has been based in Europe since 2004 and is currently overseeing churches in Hope Europe. As a gifted Bible teacher, he has been invited to speak in many countries.